Quadrilingual private local skate guide and organizer for Amsterdam and above, including Texel, Friesland, and the world’s single biggest flower bulb field.
Skate•A•Round tailor-made tours including mini-workshops, excursions and skating lessons from IISA skate instructor in Amsterdam and above the capital. 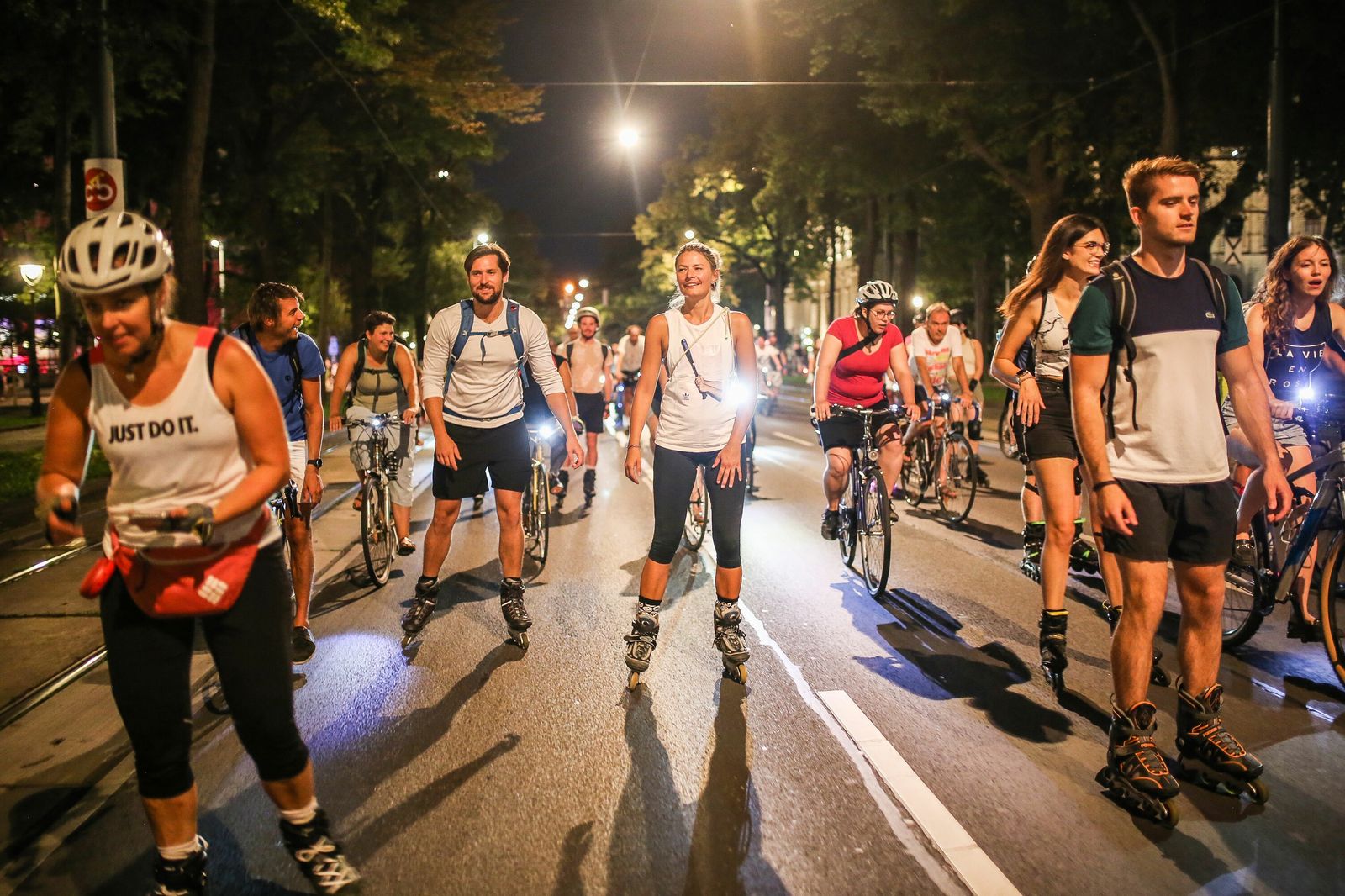 Asha Kirkby from Skatefresh says about inline skating in the Netherlands: Oh Amsterdam, how I miss your smooth streets and elegance. It’s so great for skating. Like skating through a dutch painting…. (the countryside bit) and the city and modern architecture is so cool and funky plus all the old maritime history and engineering. Love the Dutch!

Being both skate teacher AND local private guide in Amsterdam (and above) I combine these 2 skills in entertaining and educational sightseeing skate tours.

The skating tours take place in the city of Amsterdam, in it’s countryside (Like Waterland, to the beach, or to Zaanse Schans), around the tulip fields above Alkmaar (in Spring), on Texel and even in Friesland if you would like the taste of the eleven cities history.

I have drawn a map of one of the private skate tour + workshops.

Custom experience Amsterdam and above: We are Flexy and we know it.

The (L)exception: Not a private Skate•A•Round tour (6 spots) and therefore cheaper; with mini workshops included


No new date set yet.

It will be fun to make an exception to the rule of private tours and lessons. And with the new Corona policy more people in a group is possible as well.
Let’s talk Group skating tour Amsterdam with a small group (max 6 persons); small-scale. Including mini workshops on skate-able squares. Sunday Morning it is way the best time to do so, as the city still sleeps.

A small-scale group tour with mini workshops in-between on squares? What I mean by that, is stops on attractive spots in town to do a mini workshop together: better breaking, turning, sliding, off the side-walk rolling or jumping..and so on. Workshop theme for the first Amsterdam tour: scissors. Mastering scissors helps you to go over tram-rails and improve your braking skills.

And..we do not forget about the sights of Amsterdam, including some hidden gems.
The price is € 27,50 each with max. 6 people in this skate – workshop – tour. (3 hour skate tour + mini workshops in-between)


Might this be your thing? Obviously you should be able wow to break already and master the scissors.
Send Skate•A•Round an app, mail or call us.

Guided skate tour yesterday, passing by hidden gems in Amsterdam. Thank you. @raymondvanhemert for your pictures. :) (including this one, taken very near ‘t Schip.) #amsterdamseschool #spaarndammerbuurt #amsterdamtours

Skating the hidden gems of Amsterdam in the (2021) winter time with rain wheels and bearings:

Including stops on attractive spots in town to do a mini workshop together: better breaking, turning, sliding, off the sidewalk rolling or jumping..and so on.

The do-it-yourself Hidden gems of Amsterdam skate track, made by Skate•A•Round, brand of Lex and the City.

Pictures and videoclips of Skate•A•Round, including skate & sail.

Skate•A•Round not just skates on tracks with people, it hàs one too. ;) It has been organizing skate tours and skate holidays since 1998. With thousands of inline skaters we have discovered Paris, Barcelona, London, Berlin, New York, The French Riviera, Denmark, Switzerland and the Netherlands on inline skates. :)
Check links to picture pages: 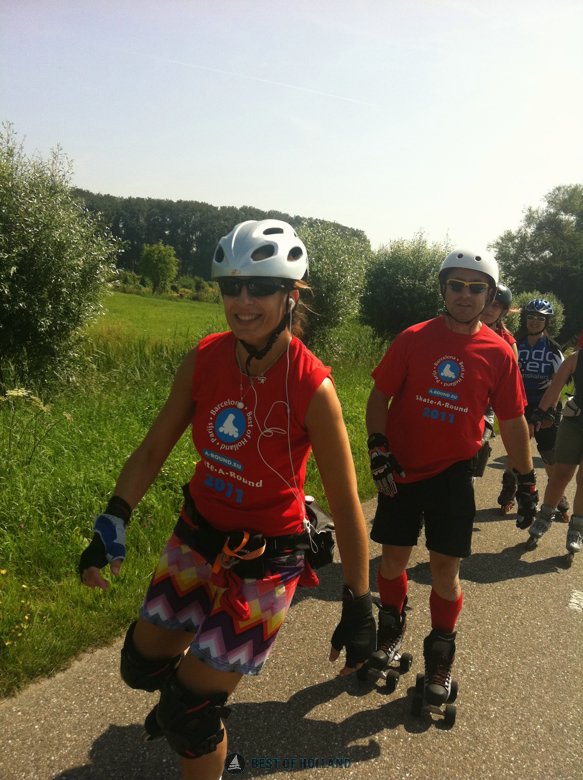 Speed, fitness and recreational skaters from around the world on the water and on wheels!
Skate-A-Round & Sail-A-Round in the Netherlands; a skate holiday in flow. :)

Sweet memories: We have been to the opening of the Oresund bridge with 140 sporty people from all over the Netherlands and then we have made small-scale tours in Copenhagen the day after with locals.

Finally learn how to break well on inline-skates. And/or learn the basics how to move, to rotate, to turn, to speed up on your skates…(even how to jump, if you wish.)

Skate•A•Round has been the leading brand in inline skating since 1998. Not just for lessons, for all kind of so-called “inline adventures”. Thousands of skaters have joined on our tours, skate holidays and skate clinics, from more than 10 different countries.

Skating instructor Lex van Buuren has been busy full time with roller blading during a periode of 12 years. After that the number of inline skaters decreased and he has transformed himself into a sportive guide in Amsterdam (and Paris)

Before your skating class with me, Lex, you might view some clips from the Youtube channel from Skatefresh Asha.
(I am her local guide in Amsterdam.)

Now, during the Corona crisis, skating has become big again.
Taking into account safety I teach inline skating for one – two persons (or one couple, one parent-child every day. And only when the park (or parking) is quiet.
7 days a week, and possible in 10 different parks in Amsterdam and 7 different braking techniques are possible.

Write a brief skate review; as we have just made a Skate-A-Round Google Business page, seperate from the Lex and the City one.

New: Private inline skating lessons in autumn and winter time in Amsterdam next to river IJ  – Under the roof of EYE filmmuseum

Scenic hotspot in North. Corona proof.
Press the roof of EYE for more information about the “protected” private skate lessons.

Become a fan of Skate-A-Round on Facebook and do not miss the online skate advice:

Skate tracks Amsterdam to roll on your own, created by fans of Friday Night Skate over the years 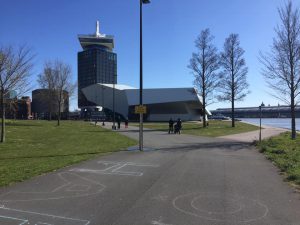 Over the years inline skaters, participating at Friday Night Skate, have uploaded their Amsterdam skate tracks. This is a hobby page.
This self-do skate-route webpage from the widely known FNS group-skate contains tracks within town and in the countryside. Like Waterland, direction beach, IJburg and so on. You find small distances and long ones.
Most of them are updated quite a long time ago.

Other private guiding roles in Amsterdam