This page is about a private tulips, daffodils & hyacinths fields cycling Tour in North-Holland; above Amsterdam.  (Lex and the City acts unusual, as usual.) Visit the largest flower park in the world. (Without queuing)

Private bike trip to the dutch flower bulbs on the top of North Holland with your sporty guide. 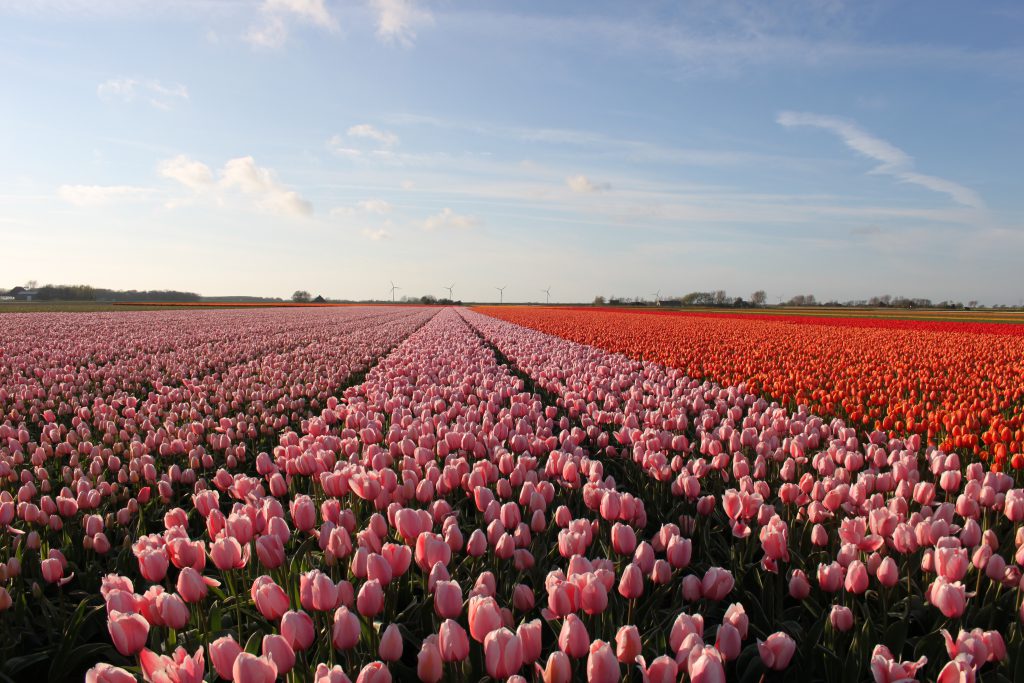 The combination of Amsterdam with Alkmaar and the tulip fields above (on wheels) is great.
This is a dutch tulip bike tour, possibly with Texel included.

The top of North-Holland, the world’s single biggest flower bulb field,  has (even more) potential for fun sporting tourist trips for international groups!

Most people, most tourists have not even considered going to this massive dutch tulip mekka. ;)
Follow your sporty private guide for Amsterdam and above; Lex and the City.

The northern part of the province North Holland enjoys the greatest amount of sunny hours in the Netherlands on average. (Source: holland.com)

Go enjoy the tulip bike tour above Amsterdam in spring! :) (half march –> beginning of may.)

The tulip tour above Amsterdam by bike | appr. 40 km | (“L”)excursion with flowers.

We speak French, German, English and Dutch very well.
And on the scooter | footbike or on inline skates the tulip tour above Amsterdam is possible as well.

Lex and the City has been checking tulip tour tracks above Amsterdam along the bulb fields in Noord-Holland North. (Above Alkmaar).
This will be part of “the Amsterdam+ Lexperience”: Amsterdam – Zaanse Schans – Alkmaar – Bulb tulip fields – Texel.

This is the recommandation Pennings De Bilt flowerbulbfarm in Breezand have sent us after our visit of their flower fields:

How do you reserve a tulip tour above Amsterdam and what does it cost?

Lex and the City tariff in 2022 for a private bike day tour in above Amsterdam is EUR 375,-. Excluding the rent of bikes, scooters or E-bikes. Or consider renting a tandem bike. Or a duo-bike.

Contact the private bike guide for Amsterdam & North Holland: [email protected] | +31 6 55 337726.
You can talk and/or write French, German and Dutch as well.
Or show your hotel concierge this private-guide-for-hotelguests-page.

Joining on an individual basis in an international group: the tulip tours are to be found occasionally on third party social websites for offline chat & gathering like Meetup, and Eventbrite.
Please ask Lex and the City for specific examples or dates. (Or ask us here for a private tour for a fixed groep.)

You want more excursions in North Holland?
“Lexcursions” with the private local guide; in Amsterdam, for example 1 hour walking tours around hotels.
Combined with Zaanse Schaans, Alkmaar, Top of North Holland (Tulip fields)  or biking with your private guide on Texel island.

The tulip tour above Amsterdam (Anna Paulowna polder and the surrounding area; 1 hour by train.)  is a great addition to the “Amsterdam Lexperiences” as a French-speaking and German-speaking private guide in Amsterdam. With bulb field tours.

Groups that approach me for tours in Amsterdam and the surrounding area can start in the capital with a “private tour Lexperience” and than go to Zaanse Schans – Texel with Lex and the City and enjoy a “round of bulbs & flowers” by bike in between. (Or as a single (“L”) excursion.)

By the way Skate-A-Round & Lex and the City have I have been doing sporty tours on Texel for 18 years, so be my guest.

Tailor made quotation for a tours in- and- above Amsterdam & contact your local guide of the capital.

Exploring Amsterdam and above over a whole weekend?: Flower bulb route North Holland – Texel: be our tulip guest.

Preparation of the private tulip tours by bike or inline skate | Pictures on our Instagram “Amsterdam_Lexperience” and our Facebook page.

Passing by one of the windmills on the Lex and the City tulip tour bike route.
The pictures have been taken in autumn. Therefore hardly any flowers are to be seen. However they give you a good insight into the beautiful surroundings.

Lex and the City acts unusual, as usual.