Best kept secret places of Amsterdam. (What you need to know or might not see.)
These unknown spots in the capital are slightly out of the box. ;)

The latest hidden gem; July, 2021 a high tech bridge in the red light district, made by a 3D printer. You have got to know it, otherwise you might just pass by. Unusual spot in usual street. ;)

Why a secret spot in the unknown city can also be a relaxed experience.

Not only is it nice to be surprised by the city, but exploring also takes you to much quieter places.

Your tailor made tour becomes reLexed in the city. Most of the locals, the people of Amsterdam in those parts of the city, also love that you come. They might have a story for you about the hidden gem of Amsterdam where you are located.

A lot of the best kept secrets on this tour guide page are to be found in the emerging quarters of this compelling town: the East and the North.

For example: the first picture of our new Amsterdam’s hidden treasures  Instagram account ⇓ contains a cool house in Amsterdam North, on the so-called Nieuwendammerdijk. (Please pronounce the name in your room. ;)

⇓ To those 28 hidden gems of Amsterdam ⇓

Recommandation about the Lex and the City “surprise me” biketour; July 2021

Review about Lex and the City customer service (August 2021) 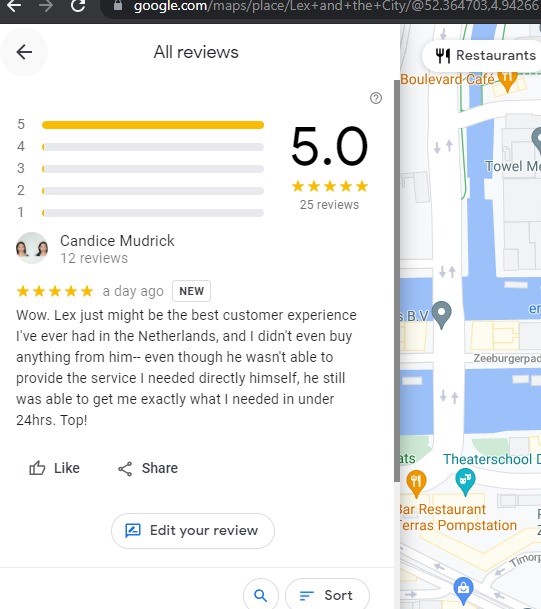 This an example (a Lexample) of a private Amsterdam tour, focussing on hidden gems. They can contain even special stores like the Johan Cruyff store in “De Jordaan” and the skate dokter in “De Baarsjes”. Moreover some unknown gems are to be found in the Vondelpark, like the (totally hidden behind trees) most expensive house of the capital.
The great track along river IJ contains some best kept secrets as well. (Especially when you include the view on the northern part of Amsterdam.)

Hidden gems of Amsterdam on a bike tour with the out of the box local guide.

Lexplore the hidden treasure of the capital with Lex and the City; that other local guide on a bike:

We are (f)Lexy and we know it.

This is the end of the article about Amsterdam secret sights. Thank you for your attention.