Offbeat experiences Amsterdam: private bike tour in the city or in the countryside. Looking for the hidden gems of the capital. Local bike guide speaking FR, EN, DU & NL

Popular private guided bike rides in Amsterdam with Lex and the City: a top-10 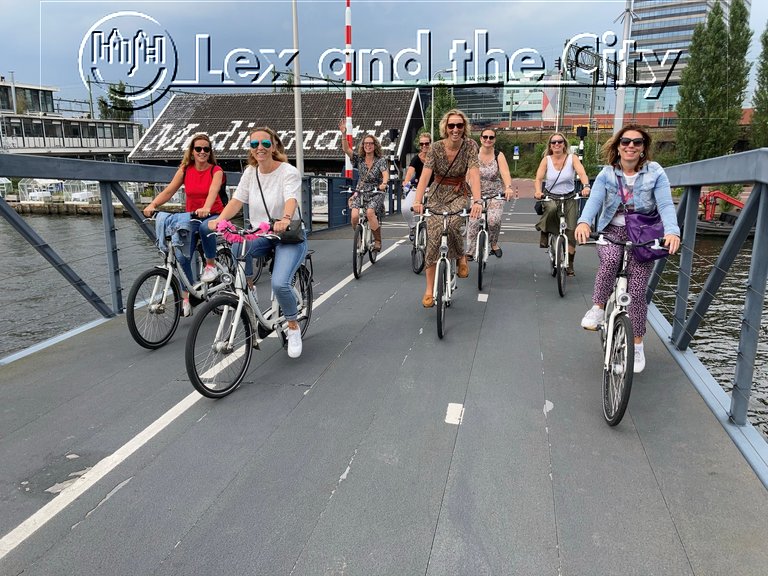 Private bike tour in Amsterdam: for groups and individuals (and VIP’s) looking for unusual experiences and hidden gems.

The customers of a private bike tour with Lex and the City are interested in local culture. Meaning diving into the unknown part of the city.
They do like to be organised and want to see as much as possible in their short amount of time.
Active people longing for hidden gems in Amsterdam to check, and enthusiastic eaters at the same time.

Generally, quite low maintenance as a group.
Anything that’s not on hop on/off tours they are interested in too – so off the beaten path cxperiences Amsterdam, want to soak up the culture of a place and if there are any must do’s.

Lex is not just a local tour guide. He also loves creating, rehearsing and doing bike-tracks outside of Amsterdam. Privately as well.
He also records the bike tracks. Including pictures; he always makes pictures, everywhere he goes.
And is even rewarded by an American GPS website for the so-called GEO-tracking. (tracks + pictures.)

Because of his history as an international inline skate guide, he has an extensive knowledge of countryside bike tours, mostly above Amsterdam.
Think about:

(And two private guided bike tours in the countryside, however not above Amsterdam)

Discover Lex’ drive, his mission as a person and as an entrepreneur (creator of new tours) and freelancer (helping out group clients of DMC’s and international tour operators.)

Bike tour in German, French, English or Dutch. | In the city of Amsterdam or in its countryside

Lex has studied, worked and lived in France. He is specialist for sightseeing tours and outings in French in Amsterdam. (Search engines know that as well.)

Moreover he has guided hundreds of German people in the Netherlands, has German friends and has organized sportive weekends in Berlin.

And is talking and writing English everyday. (And he has done an international Erasmus tourism program on the Bournemouth University.)

Although he also has a good network in Barcelona and Madrid, he does not speak Spanish nor Catalan well. He always says: “Tengo qué apprendrer Espagnol”. (But has not improved yet. ;))

Biking privately with your group (or with you) in Amsterdam: the nature of Lex and the City (L)explained

The Lex and the City private bike tours Amsterdam combine the discovery of hip & emerging parts (Full of  hidden gems of Amsterdam) with getting to know even better the people around you.
In 4 languages: French, English, German or mother tongue Dutch.

The off the beaten path experience Amsterdam can be either private or work related.
It can be in town or around town; in the countryside above Amsterdam. Think about biking to Zaanse Schans from AMS or take the bike in the train for a day trip to the flowers and bulb fields above Alkmaar and then go to Texel island by train. (Bike inside obviously, or renting a bike locally.)

Every Amsterdam biketour has its own theme. Like “hidden gems of the capital of NL”
Sometimes we add an item to the tour, like a restaurant or picnic, a language exchange, a tasting or dancing afterwards.

In order to ride our bikes comfortable and safe, the maximum number of participants is 8 people in town and 12 in the countryside.
The pace is relaxed and you will love even that so-called bikeroad. (relexed?)

Do you want to be surprised or confirmed during your sightseeing bike tour Amsterdam?

Being confirmed means you mostly want to see what one has read in the Lonely Planet about Amsterdam bike tours. And what one has seen from friends on Facebook.

Being surprised by your private bike guide Amsterdam means going for the unknown. The unlexpected :p
For the hidden gems of Amsterdam.
For off the beaten path experiences near amsterdam like the bulb fields above Alkmaar instead of the ones on the Keukenhof.
For discovering Amsterdam East on your bike instead of queuing in front of the Anne Frank House.

You can even book the “just-surprise-us-biketour” in Amsterdam. Just send us a message to show your interest.

Some bike Amsterdam news from 2021: the bike-road (or bike highway)

Private bike tour guide Lex has showed Amsterdam (and Paris) on wheels to thousands of people.
People from all over the globe. He also speaks French.

Not just by bike, but on inline skates and by scooter (footbike) as well.
He has done so in French, German, English and in Dutch.

He is always aiming at Lexceeding Lexceptations ;) by showing hidden gems of Amsterdam and great tracks to bike. Delivering customized Amsterdam tours is his way of living and working to by day.

Lex and the City and Skate-A-Round have created free publicity in well-known media; even in the UK and the United States.

Now we show you an example of an off the beaten path experiences in bike-friendly East Amsterdam:

Rates for Private cycling tours in Amsterdam and above

Lex and the City tours pricing. 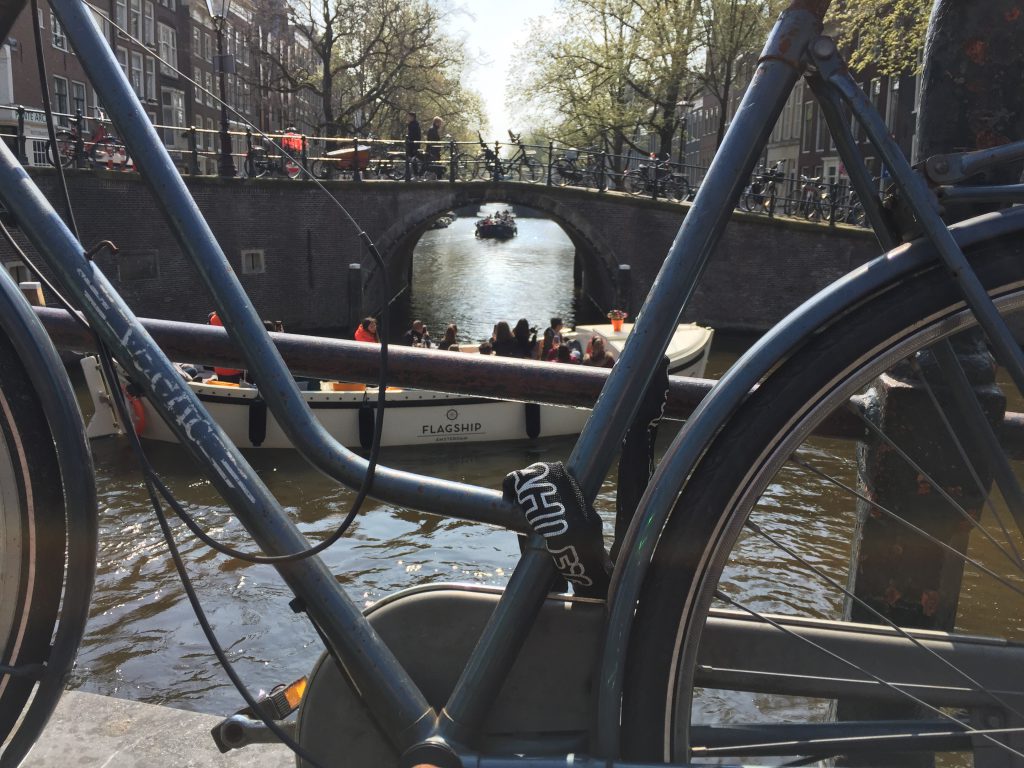 Joining on an individual basis in a group: The customized bike tours Amsterdam are to be found occasionally on third party social websites for offline chat & gathering like Meetup, Internations and Eventbrite.
Please ask us for specific exemples/dates. (Or ask us here for a private tour for a fixed groep.)

Recent reviews on the Lex and the City Google business page. (Until February 2o22)

A review from Maria about the Amsterdam bike tour lexperience in the town center: (2013): 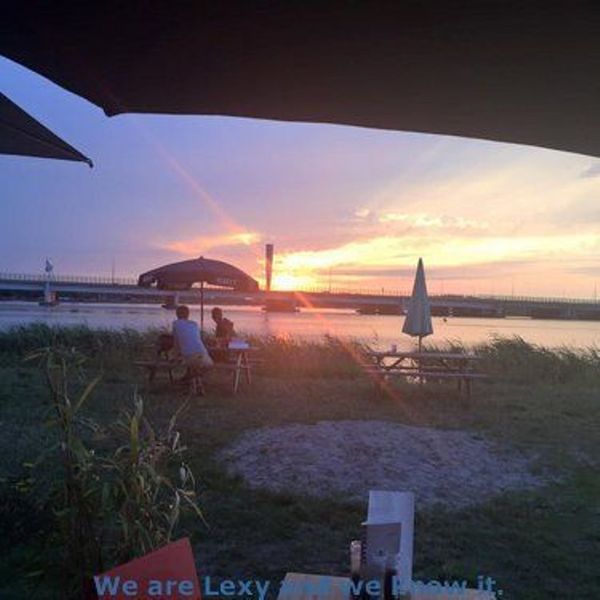 Hi all you bikers! I loved it yesterday. Thanks for your presence and thank YOU Lex to make it happen!
Looking forward to the next activity. Maria

Matteo about the Eastern Docklands & IJburg tour:
Thanks Lex for let me discover this new part of Amsterdam. You are a very great guide.

Vega from Barcelona about the daytrip to Marken, May 2019: You can use my pictures. And…thank you for the great route. I enjoyed it a lot. I hope to come back.

Private cycle tour in North Amsterdam: highlights and the feeling that comes with it.

This Lexperience is a mixture of modern architecture, ancient dike houses and durable, circular choices. This Amsterdam-North tour has several attractive and unusual elements, including a green, rural part. However it is not a countryside tour.
(And it also means not passing by the famous canals, museum quarter and Anne Frank House. OK? OK!)

Highlights biking Amsterdam-North for groups with Lex and the City: 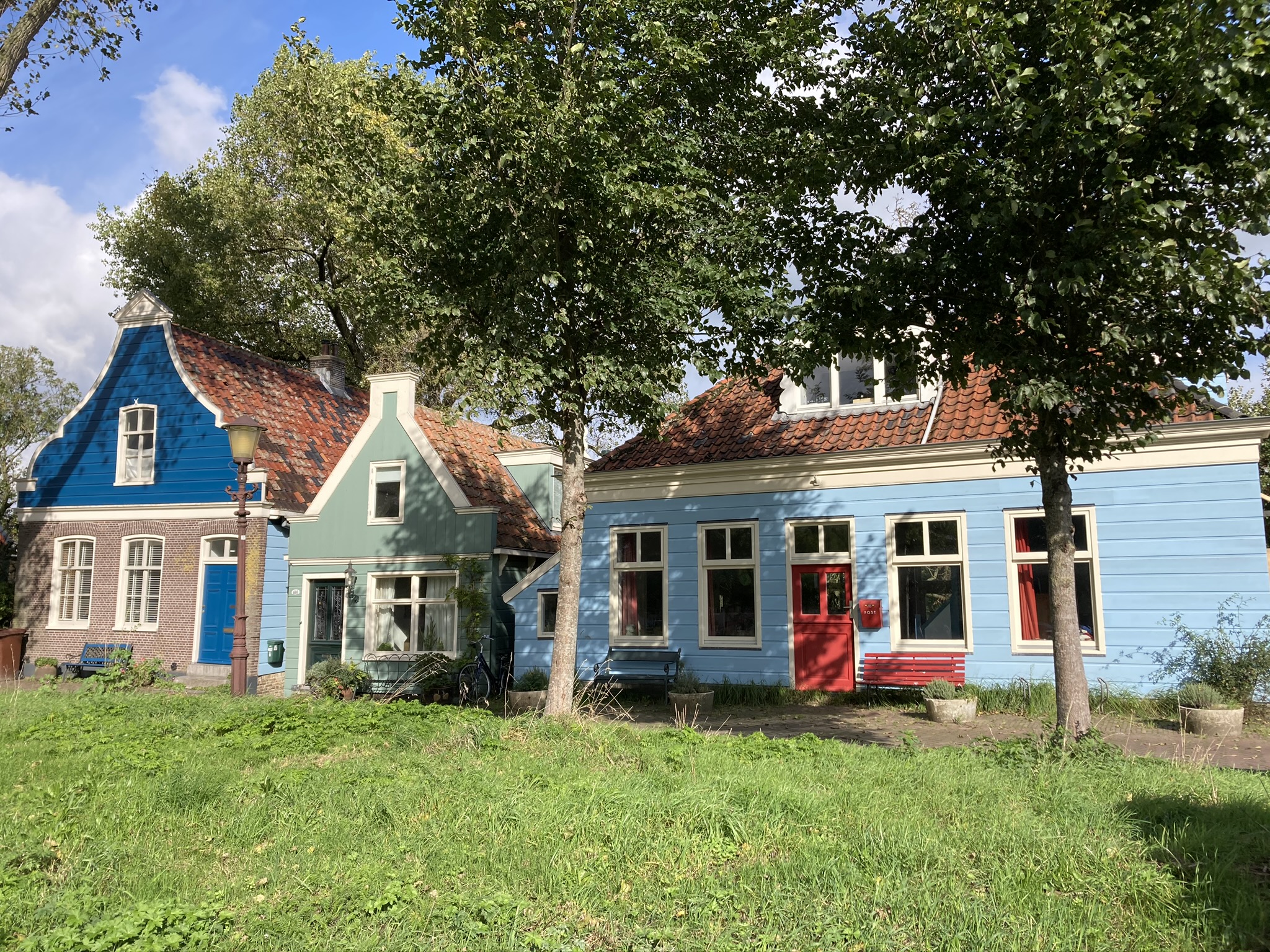 For most tourists, Amsterdam-North still is the great unknown…for you?

Discover what might be the hippest part of Amsterdam; the Eastern part, on a bike.
And socialize afterwards on the terrace, in a cafe or maybe even on the boulevard.

This hidden gems of Amsterdam tour will take place in the eastern part of the city, on the so-called Amsterdam’ Docklands: the ancient harbor which has been transformed into a great place to live and be.

And partly this off the beaten path experience Amsterdam will take place on IJburg; place of modern architecture, loads of air & space and even Amsterdam beach 2.0.

Your local private Amsterdam tour guide will tell you about the quick development of the Amsterdam Eastern Docklands. And about modern architecture of IJburg.

This tour with that private bike guide is about socializing, relaxed pace, hidden gem city items, the beach, one Dutch Downhill and fresh air. ;)

Off the beaten track private bike tour Amsterdam | 5 hours including storytelling, café stops and | or lunchtime.

Off the beaten path bike experience in Amsterdam and with quite a few so-called highlights as well. | Lunchbreak at or around Dappermarkt; chosen best market worldwide in 2008. These (L)examples make it a true hidden gems of Amsterdam tour.
27 km; nett time biking including storytelling  4 hours; 6,5 km per hour.

The 5th hour is for having lunch and and a stop for having a drink on a terrace.

A specialty of Lex and the City: Storyteller of Amsterdam East

Lex and the City has been an organizer of city tours since 1998.

Lex and the City is also the Storyteller of Amsterdam East.
Offline as well as online.
Offline: guided group tours like these for groups. Looking for the hidden gems of Amsterdam.
Online: social content creation for third parties in Amsterdam East. (And our own Blogs obviously.)

Rent A Bike in Amsterdam and free cycle routes, picked by your local bike guide of 1 hour, starting from Vondelpark

Click on the picture beneath of a bike solution to rent for your small child. Check out the store. And suprise yourself with loads of free cycle routes, made by Lex and the City local guides for their tours and free available if you decide to go biking without a tour guide.

In which situation could you consider renting an E-bike for your group tour in Amsterdam or in the countryside?

Plse read our Facebook post above, which contains an evaluation of an E-bike tour which leaded and guided in German in the city of Amsterdam.


Hidden gems of Amsterdam on the bike with Lex and the City can also be temporary objects. (Like this billionaire ship)

This 275 million yacht has been in the Amsterdam Eastern Docklands for a few weeks now. I would like to DJ on the boat for one hour or so. Lex, keep dreaming. :p #millionairelifestyle #djdream #amsterdam #djlife🎧 #iamsterdam

Bike guide in Amsterdam Vondelpark with his fakie fixie | Ready for another “Lexperience“. 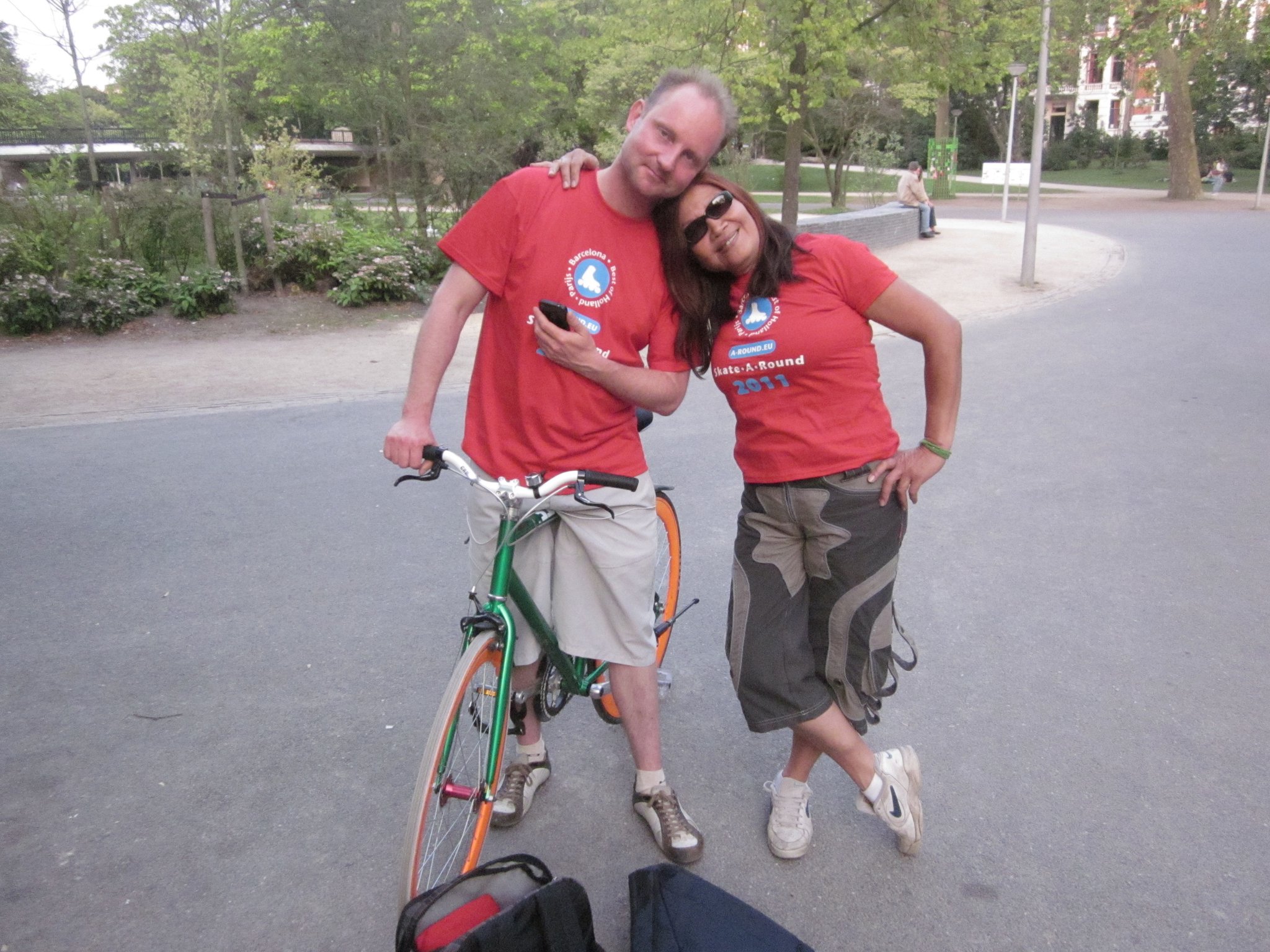 Other Lex and the City services in English.

Custom tours Amsterdam: We are (F)lexy and we know it.

Opmerkingen | Comments (We do not receive a notification by the way.)